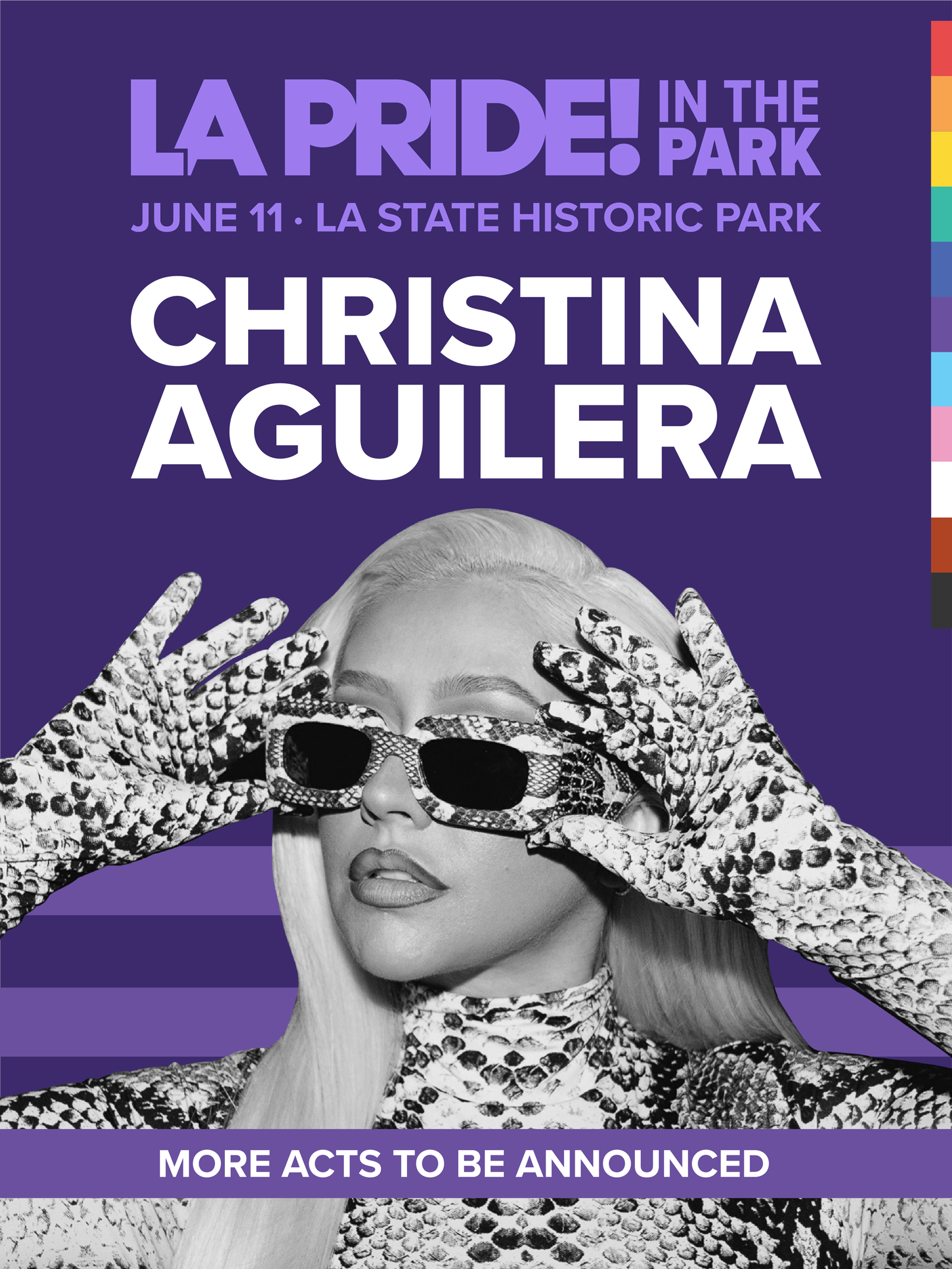 LOS ANGELES (March 15, 2022) – Christopher Street West (CSW) – the 501(c)3 nonprofit that produces LA Pride – announced today that six-time GRAMMY® winning artist and longtime LGBTQIA+ ally Christina Aguilera will headline LA Pride’s official in-person music event, billed as LA Pride in the Park, with additional artists to be announced. The multi-stage event will return Saturday, June 11, after a two-year hiatus due to the COVID-19 pandemic and move to Los Angeles State Historic Park. Across 32 acres and with a capacity for 25,000, LA Pride In The Park has the potential to be the largest Official Pride concert in the country. Additionally, #LoveYourPride has been announced as the official theme of LA Pride 2022. The theme lends itself to the diversity of the Greater Los Angeles LGBTQIA+ community, writing a love letter in every language as we celebrate Pride across the city.

“The inaugural LA Pride in 1970 set the foundation for what would become an annual celebration of the Greater Los Angeles LGBTQIA+ community,” said Gerald Garth, vice president of programs and initiatives. “Over the course of those 50 years, it has been inspiring to see neighborhoods throughout LA organize their own Pride celebrations. As we return to in-person events, LA Pride is honored to continue the tradition that we started 50 years ago, this time with the iconic Christina Aguilera in an iconic new location.”

Tickets are available for purchase at laprideinthepark.org beginning Tuesday, March 15, 2022, at 6 a.m. PST. General admission passes for the day will start at $35 per person and a limited number of VIP tickets with a slew of perks will start at $200 per person. Ticketed attendees will receive an RFID wristband to allow for contactless entry. All official LA Pride events will follow health and safety guidance as outlined by LA County health officials and the CDC. LA Pride in the Park will be produced by DPS and all creative and marketing by BMF.

“Given the LGBTQIA+ oppression that’s horrifyingly making its way into legal reality, putting our younger community’s visibility and truth at risk, there’s an even bigger reason for us to come together across the country and tell our youths to Love Your Pride. We will continue being loud and say ‘gay.’ We will continue to come together to support you. To the lawmakers who are pushing this agenda: Don’t come for family,” concluded Gerald.

About Christina Aguilera:
Aguilera is a Grammy Award-winning singer-songwriter renowned for her powerful voice and hit songs. Throughout her career, she has sold more than 43 million records worldwide. Aguilera has achieved five No. 1 singles on the Billboard Hot 100 chart making her the fourth female artist to top the chart over three consecutive decades (1990s, 2000s, and 2010s). She has won six Grammy Awards, including one Latin Grammy Award. She has also received a star on the Hollywood Walk of Fame and holds the prestigious honor of being the only artist under the age of 30 included in Rolling Stone Magazine’s list of the 100 greatest singers of all time. Additionally, in 2021 she received the inaugural Music Icon Award at the People’s Choice Awards. Aguilera continues to use her voice for good, having served as global spokesperson for Yum! Brands’ World Hunger Relief effort since 2009 and has helped raise over $150 million for the World Food Program and other hunger relief agencies. She continues to be represented by Roc Nation, CAA and imPRint. www.christinaaguilera.com